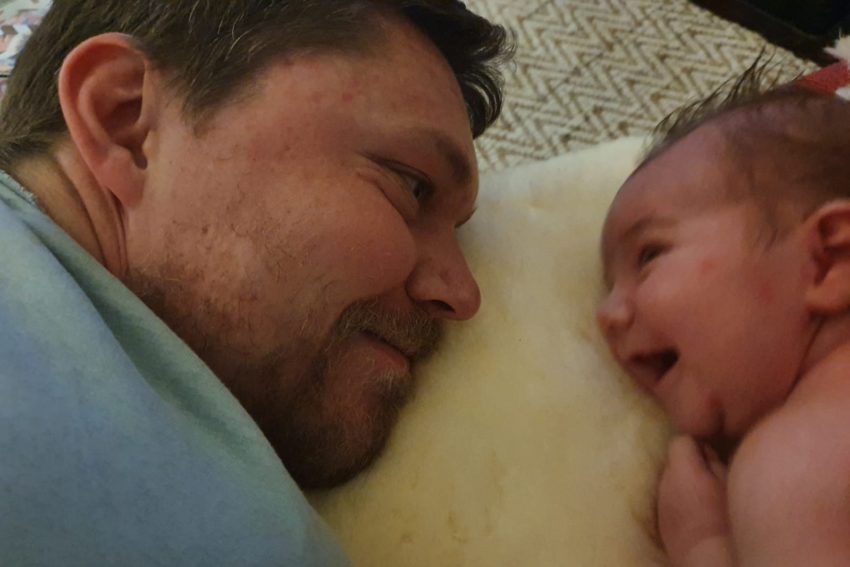 About six weeks ago, Jules’ son Robin was born. We talked to him two weeks before the birth.

Jules, you’re nearly there, it can happen anytime now. How is that for you?

It’s quite a strange feeling at the moment. It’s built up through the nine months of expecting. Now the due date arrives and you kind of expect something to happen around then. What I’m currently finding quite difficult is that I’m still continuing with my normal life, knowing that I’m about to become a dad and my life is about to change completely. It’s slightly different for Emma, my wife, because obviously she’s taken some time off work, and she’s got the maternity leave afterwards. My paternity leave just starts whenever the baby arrives. So it’s a limbo feeling at the moment to be honest. I’m ready to go, but it’s just waiting and waiting.

So you just carry on until the moment that it happens?

Yes, I’m basically continuing on till literally the end. Doing a day’s work, and again doing a day’s work, and being prepared to pass over all that work for someone else so that they can carry on. Every day just doing that, it’s a really odd scenario. I’m not sure everyone at work kind of understands it. I think now it’s a different generation of fathers than the previous ones. I’m sort of taking advantage of a slightly more dad-friendly approach to parenting in the UK. But not everyone has changed their perspectives on it. It can be quite difficult to deal with some of those people who don’t seem to have the same outlook as I do.

How have the past nine months been for you?

Well, we had actually just started redoing our house when Emma got pregnant, so we’ve been trying to get the house ready for a baby since then. It’s been quite a full-on nine months, it’s all been working towards what is about to happen. So that’s given me a purpose, in a way. I haven’t had time to sort of sit around and think about it. I don’t know whether that’s good or bad, really.

It’s flying by surprisingly quickly, and as it’s got more towards the end, there are more moments of realisation: am I really ready for this? That’s probably quite common, to be honest. I guess you never can be ready until you actually have to do it. The work on our house has sort of kept my mind off that, and that’s probably quite a good thing.

So you’ve basically had enough practical stuff to focus on?

Yes, I’ve had plenty to do. I’m not sure if I would have liked it a different way. I think I could spend quite a lot of time thinking about what is going to happen, and probably work myself up into a bigger panic… I think that’s kind of the way I am. So in a sense it’s been helpful to not have that.

It’s been quite intense, but the fact that we know that we’ve got a deadline of when we have to do it by, helped us. We’re now going to finish up the last things on the list. I don’t think without that deadline I would have been able to do as much, it’s given us a goal of what we want to achieve, to have a nice house to be able to enjoy having a baby in.

What were your highlights of the last nine months?

Finding out Emma was pregnant was just great. I’ve also really enjoyed all of the scans. They’ve been fascinating, to be honest. Just seeing the baby grow over those stages… And the first time I ever heard the heartbeat was quite emotional really. It sort of caught me off guard, to be honest.

Just to see the baby growing, moving, see the face developing over time is fascinating. That’s what I’ve enjoyed most. One of the strange things about being the male on this side of it is: you’re really not the one that is pregnant, although you kind of go through it together. You’re not feeling the same way. I think that’s why I’ve enjoyed the scans, because it’s given me a lot more of a connection with what’s happening. They’re the only sort of real connections I can have with the baby during pregnancy.

Do you remember when you actually really realised that you were having a baby?

There was obviously a realisation of sorts with the pregnancy test. But I guess it takes a little bit of time for it to kick in. I think the first scan was probably the real realisation moment. At that point it feels very much real and I can see something on a screen that is my baby. That’s why it was quite emotional, why it stands out. At the later stages one of the things I’ve really enjoyed is being able to feel the baby kicking. I can feel it a foot sticking out, can push it through and it’ll move away, or kick me, and it sort of feels like I’m playing with the baby already. That’s the closest I can get to getting some interaction.

How does that connection feel?

It feels like an interaction to me. I’m not sure what the baby thinks… It may be a little bit concerning to the baby – I hope not! There is certainly some sort of actions that happen as a result of me touching the foot or things like that, that’s quite exciting really.

Have you noticed any changes in yourself the last months?

My worries in life have changed. I started a new job 18 months ago or so, in a way starting a new career. So I’ve been wanting to be successful at that, do well, et cetera. And I still do, but I have less anxiety about it. It’s slowly dawned on me in the last couple of months that it’s not the most important thing for me now. I suspect it’s probably not uncommon, but it’s quite nice to actually feel it.

Is there anything else that’s changed?

I think that’s the main thing at the moment. Personally I’m still in that limbo stage of before the baby’s actually arrived. I know my life is suddenly going to be very different, that will also change me as a person. A lot of people, friends or family who are parents, have offered their support in the coming months because they have experience of what I’m about to go through. They’ve all offered me help, and I’ll probably appreciate it a lot more once I know how useful it’ll be.

What was it like for you to play the part of the ‘partner’ in all of this?

It’s quite a difficult thing in a way. I know she’s going through all the different changes – very substantial changes in her body, and of what she’s able to do, what she feels etcetera. At the same time, I’ve become slightly paranoid, worrying about every little thing, if she has a pain or something. The strangest thing about it is that I have no real control over that, and I can’t do much to help it, other than just kind of try and support where I can. I wouldn’t say I feel helpless about it, but it’s that feeling of not really being able to influence things.

It’s different sorts of problems, you know. If you want a picture put up, yes, I can do that, I can put a picture up, no problem. But it’s not that kind of problem anymore.

And now, if you look into the near future, what’s the image you have in your head? What are you looking forward to the most?

I think I’m just looking forward to being able to spend a month with myself and Emma and our new baby. That’s really what is going through my mind most of the time. There’s the obvious event of actually the birth itself. That’s a really strange one to think about it, because again, it’s one of those same situations where I’ve got nothing I can do to sort of help that. Ultimately I’m a bit powerless in that situation as well, and that’s the most traumatic and amazing event all rolled into one. And then after that, it’s being able to actually have a month off and really get to know ourselves as a family. That’s a new dynamic, really the new style in our life. Nothing will ever be the same again, and I’m really looking forward to it to be honest.