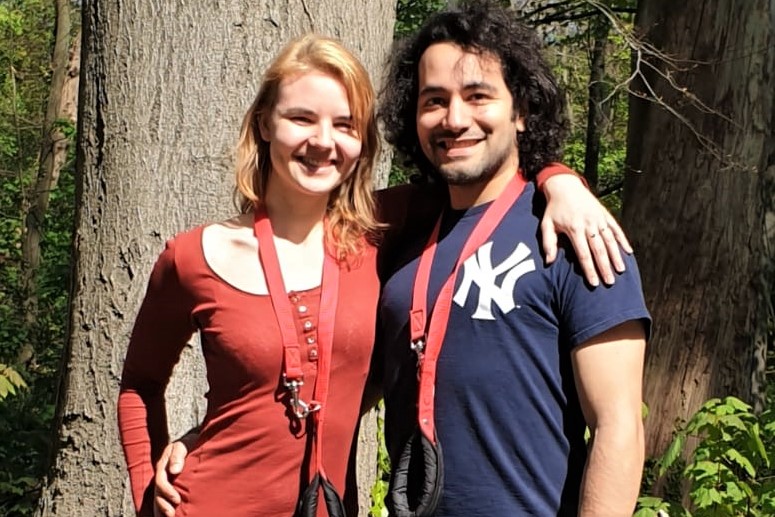 Leon is becoming father for the first time. His wife Lara is 29 weeks pregnant.

Well, I’ve always wanted a child, I’ve worked a lot with kids, so for me it was always something I was sure of. So now I’m just really happy every day. I am also a bit inpatient I will admit. Having to wait two months more. Now I’m just thinking: come on, hurry up.

We are in the middle of moving house so it is a bit difficult for Lara, my wife. She sometimes doesn’t have the easiest time and she tends to do more than she should be doing, which can end up with her having backpain or other kinds of pain. So as her husband, I find that a bit challenging as there is nothing you can do. The most you can do is try to put all the load on yourself, as much as possible and hope that she will allow it.

What do you find challenging in that?

The challenge is finding a balance between giving her enough things to do so she is contributing to the move, without giving her the load that will actually hurt her. If she’s unable to do some of all of the stuff that needs doing around the house or for the move, it bothers her a little bit that she can’t do as much. So the difficult thing is finding that balance: how much should I be protecting her and how much should I be giving her space so that she can still do things and feel useful.

So every day it’s a bit different. We have had conversations where I say look, there are things that you can really help me out with and still just put your feet up at the same time. She can do tasks now that still need to be done but that are less demanding on the body, like sorting out internet. “Okay, you handle the phone calls, you have better Dutch than me anyway, and I will get down and install the lamps…”

And if you look back on those 29 weeks that you have had. What were the highlights for you until now?

I think that would have to be the day we found out. That was such a rush. I cannot explain it in any other way than just pure bliss. And after five weeks telling our parents, our brothers and sisters and seeing their reactions. It was brilliant to see. My mother cried, my father was as excited as I was. My brother and sister in law were just completely jumping from happiness. My sister and her husband were also very happy. Seeing my in-laws who were also very happy.

We had this whole thing planned which Lara had been talking about even before she was pregnant, about how she wanted to tell the family. She made these mugs, and each mug had the name of a family member, for example ‘oom Bas’, ‘opa Peter’. So we would offer the family members tea or coffee and then we would bring them their mugs and then see their reaction. That is what we did. She was thrilled, and I was thrilled just to see that it made her so happy.

Wow, that’s nicely thought out. And what other highlights are you thinking of?

I think that the next real rush was every single echo in which we got to see our baby girl moving around. That was just – I cannot describe it. Pure happiness. Now every week on Wednesday or Thursday we are counting one more week down. It is an exciting thing. There’s a little bit of anxiety because we also have a lot of things that need to happen before we can fully have the kid, with the moving and everything. But at the same time, it is still just a very happy thing.

Was there anything that surprised you in the whole process?

You know how people say that you have no idea how much you are going to love this kid until you actually see them. I did not know that was true. I mean, now, as I say, it’s pure happiness. So, whenever I have seen Laguna – that’s her name – whenever I see her in the echo it’s just: wow! I feel like we already know her without knowing her. That is something I didn’t expect. Every time I touch the belly, she starts dancing around, moving around. I did not expect that kind of interaction. I read about all of that during my studies, but at the same time I didn’t expect it to be that tangible.

I knew I was going to love this baby, no matter what. But I kind of thought it was going to happen a bit later. I did not think it would happy already now. And I’m a little bit scared by how overwhelming it is going to be on the actual day when I meet the baby. Scared is not the right word, but I cannot imagine what that will be like.

Yes, I can relate to that. And how has this time changed you? Have you changed in the last 29 weeks?

I would like to think I have. I feel like I have gotten very serious now, making sure everything in the house has to be good. I have been doing things myself that I probably would not have been able to do in the past, but now I just want to make sure everything is done well and in time. I have learned to do things that I did not think I would know how to do. So I am just stepping up a little bit.

Is that out of responsibility or just to make it happen? Or do you have more confidence?

Have you talked with friends or family about how you feel about it, about your fatherhood and everything?

Yes, I talk with my parents all the time about this. We have a WhatsApp group, and we share pictures and videos and we joke about the baby. We don’t really go too much in depth about how happy we are, but I think we all are on the same wavelength.

Leon, if you summarize your whole experience of the pregnancy until now in one word, what word would you choose?

I see the way the belly moves and I see the way that she is kicking and moving and I think it is just amazing that there is a little human being growing inside of that belly.

You know, we have two dogs and yesterday we were going to the park to walk the dogs and the dogs were whining, and my reaction was to shush them. And when I made the sound to shush them, Laguna kicked Lara inside the belly. For me, that is just amazing. She is not even out there, but she is just listening so intensely to what we are doing and saying.

These things could all be just in our head, but I just think it is so amazing.