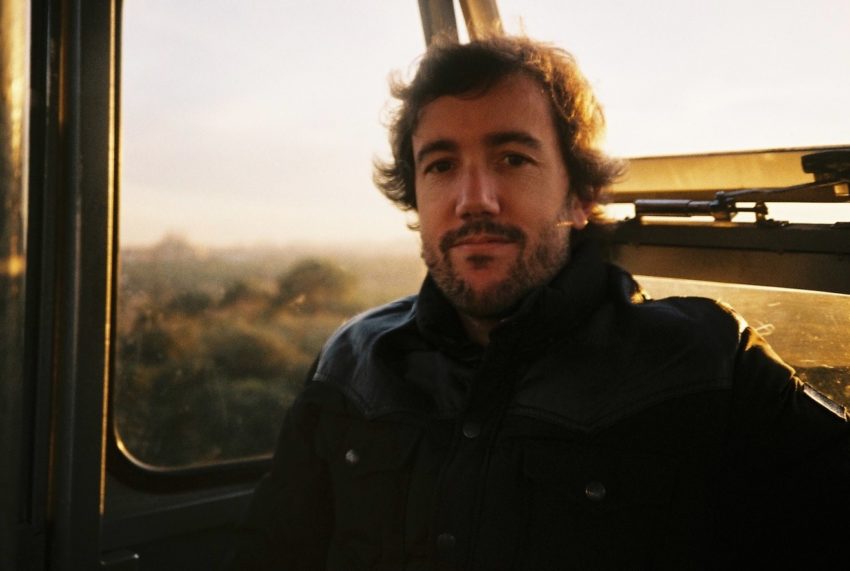 Gonzalo lives in Amsterdam with his girlfriend Evelien who is 33 weeks pregnant. His twin daughters, from a previous relationship, live in Madrid.

Gonzalo, for you it’s the second time that you’re going through a pregnancy. Is it different for you than the first time?

It’s very different. Eef is doing so well. I feel like an external party, if you know what I mean. I mean, she’s is carrying the baby, she’s feeling pain sometimes. I can’t help her a lot with that. I wish I could carry the baby for a few hours sometimes. But I have to say that she is doing it wonderfully and I have the feeling that the pregnancy is going really fast.

We had one kind of frightening moment when it turned out that there was this little valve in the heart of the baby, which wasn’t opening one hundred percent. In the very moment it was frightening, but then the doctor told us it should be fine. The valve is not perfectly shaped, but it’s fine and the rest of the system is okay, the baby has normal weight and size. So in the beginning it was concerning, but now we are dealing with the idea much better.

Compared to the the other pregnancy, with my former wife, it’s different. Back then it was not a natural process, it was an in vitro fertilisation. So we went through a lot, and finally it worked out and we even had twins. But of course the process was very much controlled, and it took a lot of energy. So to compare both, this time, with Evelien, the feeling is much more relaxed and natural.

And what’s it like for you? You already have two daughters, and now you’re expecting another child. How does that feel?

In a way it’s taking me a bit longer, because as you said I am already a father. The first months of pregnancy I was not thinking a lot about being a father again. I have my girls in my mind and in my heart a lot, and I want to be there for them, even though I live in the Netherlands. I want to be as good a father for them as possible. Now I’m starting to think more about the new fatherhood with our future boy. I have to say I’m getting more excited. To know that it’s a boy, he will be born in a month and a half, and we already know the name. Now it’s becoming more real, more present, for me.

So it took you more time to make some space for it, because you already had your girls on your mind?

Yes, it’s a combination between both. But I’m sure that the day this boy is born I am going to pay a lot of attention to him. It’s not that my girls are first or anything like that. It’s about timing as well. For now I also have to look out for the girls. And that also means that in the next few weeks I won’t be able to see my daughters as often as I would like because I have to be around Eef. So these last weeks of the year are going to be a little time-out with my girls. Then I will see them again next year.

And this pregnancy that Evelien is going through now – you said before that you are this external actor, that she is bearing the burden in a way. How do you deal with that, what’s your role?

Of course I try to take care of as many things as possible at home. Even though I have to admit she does the groceries more often than I do. But I try to be there for her. If she is feeling some pain or she is worried about something, I try to stop whatever I’m doing, put away my phone or my computer when I’m working, and pay attention to her. She needs to be listened to. I think it’s key for me to show her how important she is. Because of our routine and working and all that, I think it’s good for the two of us to stop sometimes and to connect with each other, in a natural way. It’s all about connecting. It sounds simple, but I try to keep that in mind. It’s important for me to take good care of her in any way that I can. It could be the daily things, but it could also just be a time out. Just listening to her, to whatever she is feeling. And being loving and caring of course.

So it’s not just doing the groceries but also being available in an emotional way and a connecting way?

Does that change the balance a bit in the relationship? And is that easy for you, or difficult? I myself find it difficult sometimes, so what’s that like for you?

Yes, I agree with that, there is another balance. I understand that it has to be like that in a way. During these months sometimes it might be easy for me to forget that she is actually pregnant, that there is a baby growing inside of her. I don’t know if the word is unbalanced, but it can be tricky with some stuff. For example when I want to go to Madrid to see my girls, sometimes I keep doing my thing. Of course I’m not forgetting about her, but in a way it’s good that she reminds me to have some extra attention for her, because it can be hard to keep up with that.

So it also requires something from you of course. If you look at yourself, have you changed throughout these last few months?

That’s not an easy question, you know the kind of year that we are having… Personally I have gone through a lot, also because of the relationship with my former wife and a new job. It has been quite a year! I would say that if I’m changing, I’m changing for the better. I’m reading about education, and in a way I feel very prepared for my new child and also for my daughters. I have the feeling that I am becoming better at parenting. Of course Evelien is the one that is going to deliver, so it’s natural that she is a bit more nervous. I am more relaxed, I am an optimist, and I think it’s going to be fine. I feel like I am capable of taking good care of a baby.

Is that different now, if you compare it to your first pregnancy? The amount of trust you feel?

I have always been quite good in adapting to change, so also with this situation I just kept going. But on the other hand it was also a very intense time of my life back then. Now I feel more mature, more aged or something. Back then I also did a good job, but there is always room for improvement. I’m realising stuff now that I can do better with my girls, and that I will try to do better with the new child.

If you were to summarise the whole pregnancy in one word, what would your word be?

It’s been, in way, the opposite of heavy. It’s been light. I don’t know if it’s the right definition, but I have that feeling. It’s not dragging us down. Of course we’ve gone through some situations where we’ve been more grumpy. But overall we’re feeling good and light.

So maybe there is also this expectation that it would be heavy, but then in the end it’s not?

Yes, also because of my experience in the past. Now, to me everything feels easier. I also see right now that many friends are having children and you see that new parents are more concerned. With the first child it’s natural. Sometimes it’s nice for me to look at them and to think: well, this is the way that you’re doing it now, but whenever you have a second child, things are going to change. I think I have that advantage now.